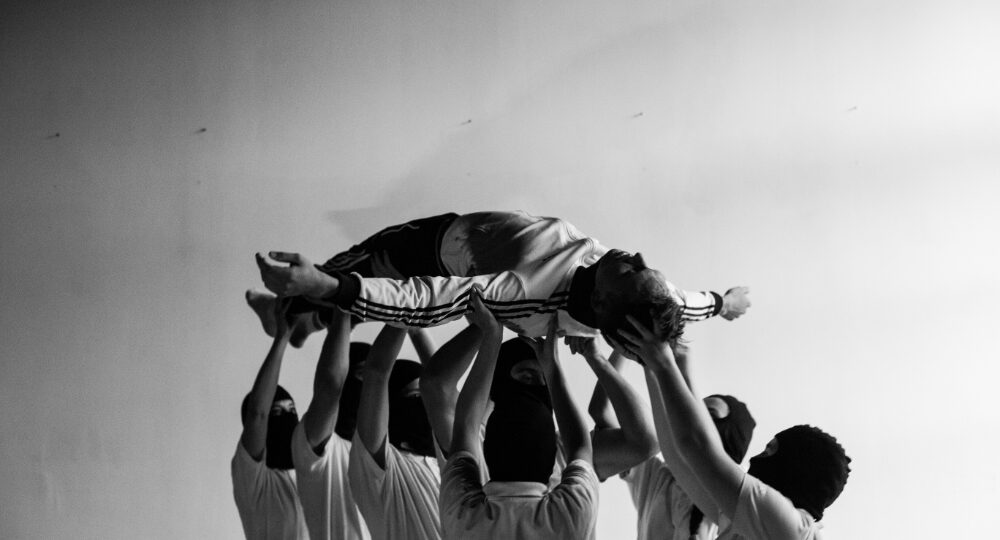 It is Thursday 26th March, morning. Jessie, Pete and Olesia meet using Zoom to discuss Freddie’s questions about the project. Pete tries to record the meeting but it doesn’t save.

WHERE ARE YOU NOW?
Jessie is in her flat in London, above a shop called ‘House of Beauty’.

Olesia is in her flat in Kyiv. She is close to the park and the lake.

Pete is in his flat in Berlin with a view of the park, his balcony looks on to the tree tops and the squirrels leaping between the branches.

We talk about how the last time we saw each other (Saturday 14th March in London) we had had to work furiously to find a route home for Olesia and the actors, Sam and Mirra, before Ukrainian borders and airspace closed. We remark upon the way we all worked together to find a solution (in the end they flew to Budapest and found a way across the border from there). 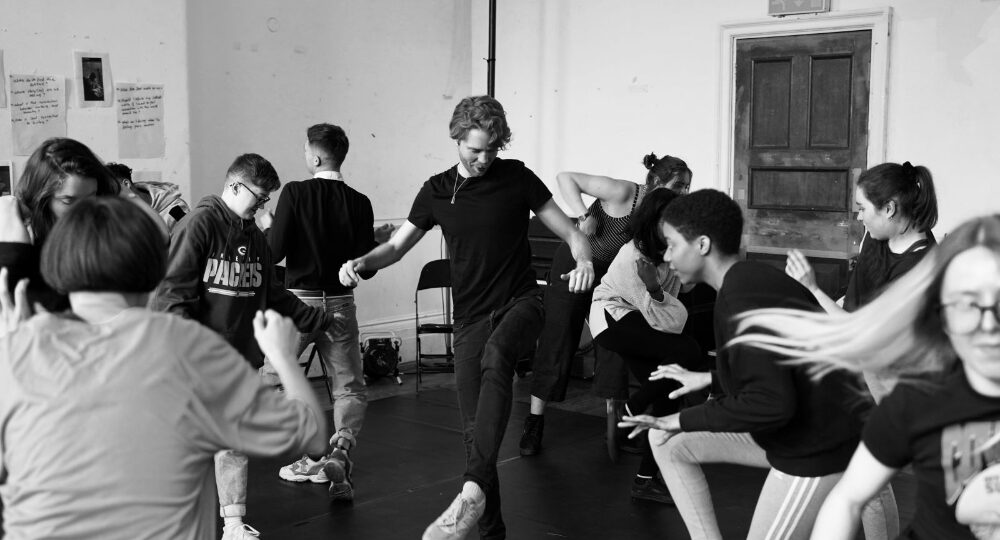 WHAT DID YOU LEARN OR DISCOVER DURING THE WORKSHOPS?
The workshops took place within the context of a week-long residential stay at Battersea Arts Centre for the Hooligan company.

With Various Stages, we had planned three days of work with a young adult community chorus, a 14-strong ‘hooligan chorus’. Unfortunately, we carried out only one of the three intended workshop days for Various Stages, before the crisis intervened, but we agree that a lot was learnt on that sunny day in Clapham.

Jessie is enthused by the group who came to work with us, and is still thinking about them. She is delighted by the response to our open call for participants and intrigued by their motivations for signing up. She feels that this call to participation was itself an important element of the work, as it opened up a space for individual engagement with our subject matter and chosen form, which in turn contributed new perspectives. Some participants had come out of an interest in football hooliganism, or in the themes of tribalism and belonging; others were attracted by an opportunity for collective experimentation in music-theatre.

Pete is moved by the way the Ukrainian actor (and former hooligan) Sam shared his story with the participants and the creative response it inspired in them. Jessie observed that the chorus was able to form an ‘animal’ connection very quickly, creating a lot of noise and a powerful force between them. Pete reflects on how great it was that we created a lot of different sounds together on that first day. Jessie wonders how we would take this brute power and start to introduce disciplines for the creation of sound, collectively and individually, building on our experiments with intoned cluster-chords, chanting, clapping, phasing and tension in the breath.

Olesia remarks on how interesting it was for her to work on the theme of masculinity, particularly from the perspective of domination. In her work Olesia often encounters the expectation that she must be dominant; playing music to a dance floor as an act of power, she feels she is expected to show aggression in the artistic sphere. This parallel with Sam’s story intrigued her. She is happy to be working in a process where the power is collective, a process by which we are not seeking a perfect polished sound, but instead value a spirit of curiosity and interest which does not limit us to the traditional parameters of our individual practices.

WHAT WERE YOU PLANNING TO PRESENT?
Jessie has a notebook full of ideas, most of which we just touched on in the first workshop. For her, the presentation would have explored the sound of our hooligan chorus, a group of non-professional singers, creating soundscapes together. She and Olesia had planned to discover a clash-space of tension between human voice and electronics. Different areas of expression would have included the ‘bellowing’ voice - something like the sound of hooligans entering the field of battle. This would have given way to an exploration of the softer, busier ‘pair work’ of the fighting itself, of fists, breath, scuffle, gasps. There would have been song: the chorus in one voice together, performed in different registers, sometimes sweet as pop, other times unrestrained like an outburst of football chant in a stadium. The classic stadium sound of a clapping rhythm would have introduced phasing as a technique and audience integration would have played a part, either through chant, body percussion or song. We would almost certainly have sung West Ham United Football Club’s signature song, which, when sung collectively, is a cathartic evocation of solidarity in the face of defeat and disappointment:

Jessie wonders where tenderness would have come from. She thinks about the hum and whistles of a ‘bird’ chorus, developed from Sam’s recollection of the hush before a fight begins in a forest against an enemy hooligan firm.

Olesia thinks about the black box space of the ICA theatre and what a departure it would have been from our research in the resonant BAC and during the 2019 laboratory in the epic halls of the Mystetskyi Arsenal in Kyiv, where the project began. Performing at the ICA would have been an opportunity to work with silence and tension, she reflects. With an absence of echoes it would have been a place to develop psychological tension, perhaps also a dance sound.

Pete thinks back to a day in the Grand Hall of the BAC where the core team created a dance with guest movement-director Mathis Kleinschnittger, a dance for the whole group, travelling in a line, with jumps and kicks, soundtracked by sampled recordings Olesia had made from the BAC’s slamming doors. Pete wonders if this would have become the backing to a monologue, or a song, or if it would have rounded out the presentation in a durational way, creating what Olesia called a ‘magical pass’ - or physical invocation - designed to disperse the ‘bad tension’, resisting the worried mood of the time, alleviating present problems and letting go of past confusions. 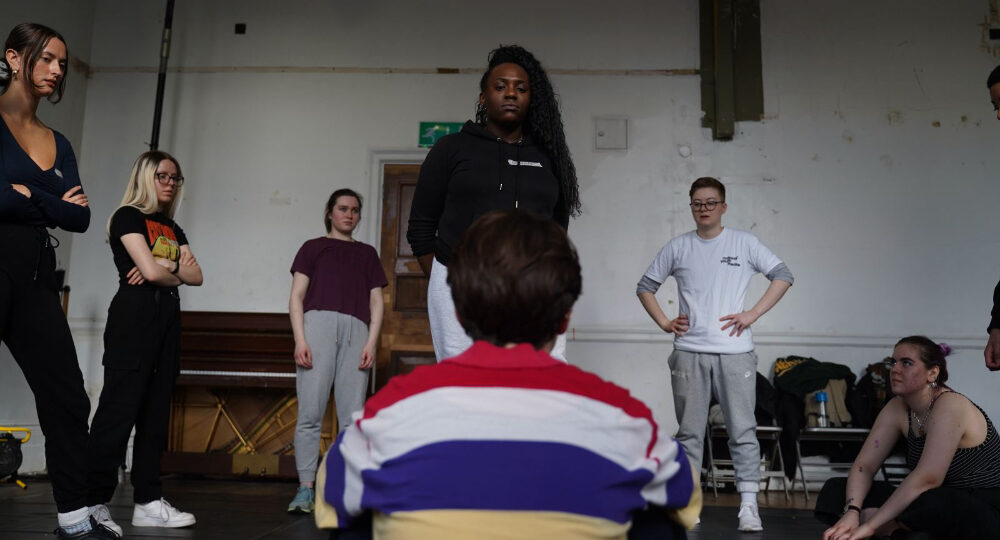 WHAT'S YOUR DREAM SCENARIO FOR THE FINAL PRODUCTION OF THIS PROJECT?
Olesia doesn’t have a vision of the final production yet, but she is committed to our principles, which she tries to name. For example, she loves that we do not ‘invent’ anything in a disconnected way. She says what she means is that everything we create feels very alive, even if in its early stages it lacks polish or finesse. Jessie agrees and questions the idea of a ‘final’ production, given that the way we work is so continuous in its response to both the people we work with and the physical setting in which we find ourselves. “We get in step then move to the next place” she says, unconsciously echoing the pattern of our ‘magical pass’ dance. We share a vision of touring ‘Hooligan’ to various spaces (stages of our own making) all over the world, be they multi-storey car parks, vacant lots in industrial zones, cavernous factories, empty opera houses or ruined churches. Olesia thinks the show could happen anywhere. She feels it is the ‘state’ of being and creating that is important. Pete is always amazed at how we find that state collectively, and how well it seems to be unlocked by the power of Sam’s story. The themes of this project and the power of the musical ideas are important ways of helping audiences connect to their own state of presence. We share a vision of an active audience, with freedom to move and to participate in the work. Pete says the dramaturgy will always be informed by the physical architecture of the performance space. Olesia seconds that the sound will always be informed by the acoustic of the space. For Jessie, there is the potential that we work with different non-professional choirs wherever we tour. 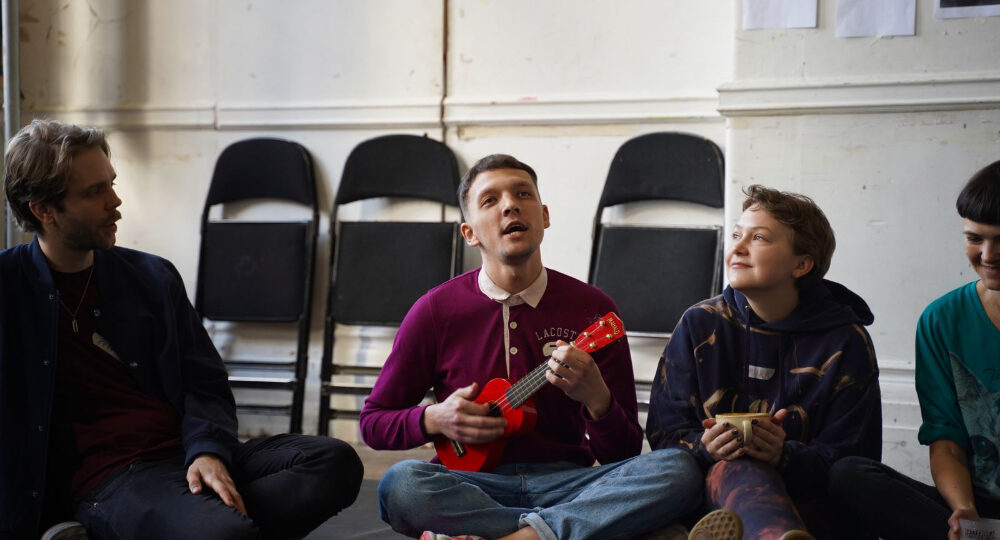 WHAT OR WHO ARE YOU STILL LOOKING FOR?
We speak almost as one: We want this R&D to continue; we vitally need the support of those who appreciate our way of working and are excited by it; we want to keep working with Mahogany Opera; we need the possibility to keep meeting and working together, in international exchange. “Everything is in us” says Olesia.

Yesterday brought the announcement of massive cuts to the culture budget in Ukraine, threatening to decimate the independent scene, which had only recently begun to grow. We hope our experience with Various Stages heralds the beginning of a period in which our connections to friends, institutions and supporters worldwide will grow.

We end the call with a thought for our chorus in London. We are going to write them a letter. Jessie will include a tutorial for ‘Bubbles’. We hope they will each make a recording of themselves singing it and send it to us. Maybe you will too? 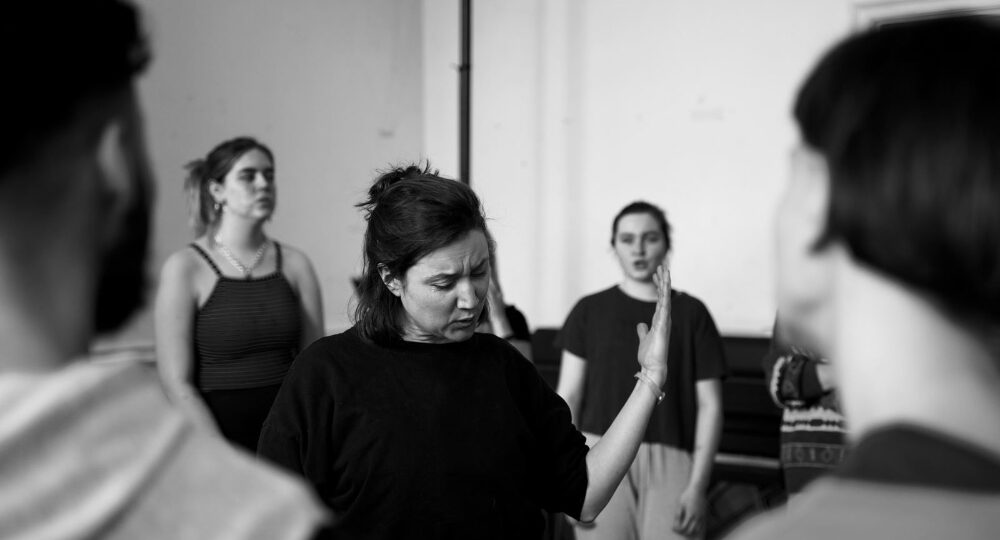 ABOUT THE TEAM
Jessie Maryon Davies is a pianist and composer. She works for many of the U.K’s leading arts organisations as musical director, concert-presenter and workshop-leader – engaging people of all ages and abilities in making music. She is founder member of Classical storytelling ensemble TROUPE and Musical Director of trans-inclusive, women’s pop choir Lips.

Olesia Onykiienko is an electronic musician, composer for theatre and curator from Ukraine. She releases music and performs live as NFNR. In Hooligan she continues her artistic approach of drawing the audience’s attention to re-discovering sounds that surround us in everyday life, or which occur site-specifically, which are amplified, exaggerated, transformed and given power.

Peter Cant is a director, performance maker and librettist. He loves working with music in different settings, including with young people and communities. Since 2016 he has worked with a company of actors based in Kyiv, directing site-specific interdisciplinary performances in Ukraine and Germany. Their latest work together is ‘Hooligan’.

Mathis Kleinschnittger is a Berlin based Dancer and Choreographer. He joins the Hooligan-project as movement director in the London residency. He is interested in finding people’s individual movement qualities and expression.

Hooligan is a collaboration with the Kyiv-based actors Sam Kyslyi, Danylo Shramenko and Mirra Zhuchkova. The project was first developed in 2019 at Gogolfest, Mariupol and Mystetskyi Arsenal, Kyiv (supported by Culture Bridges). 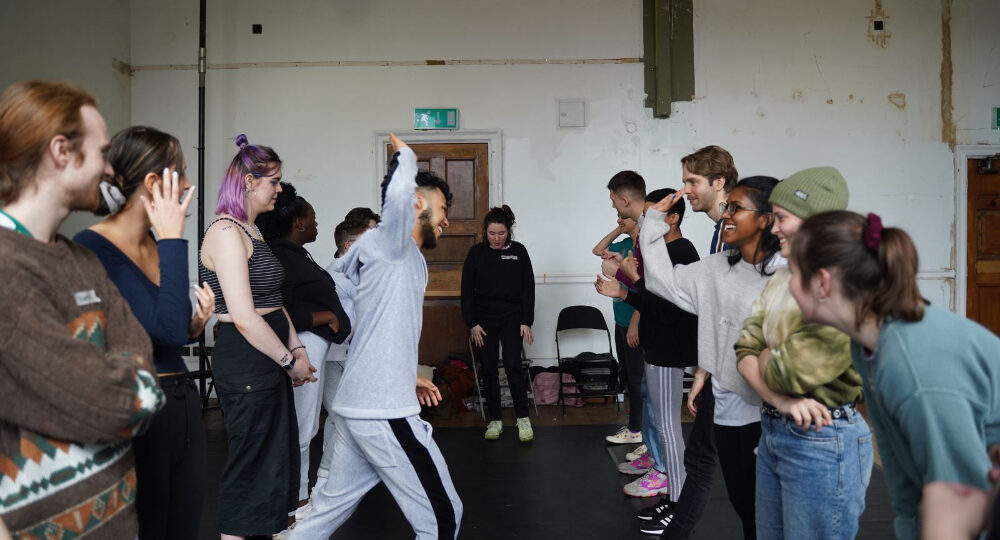 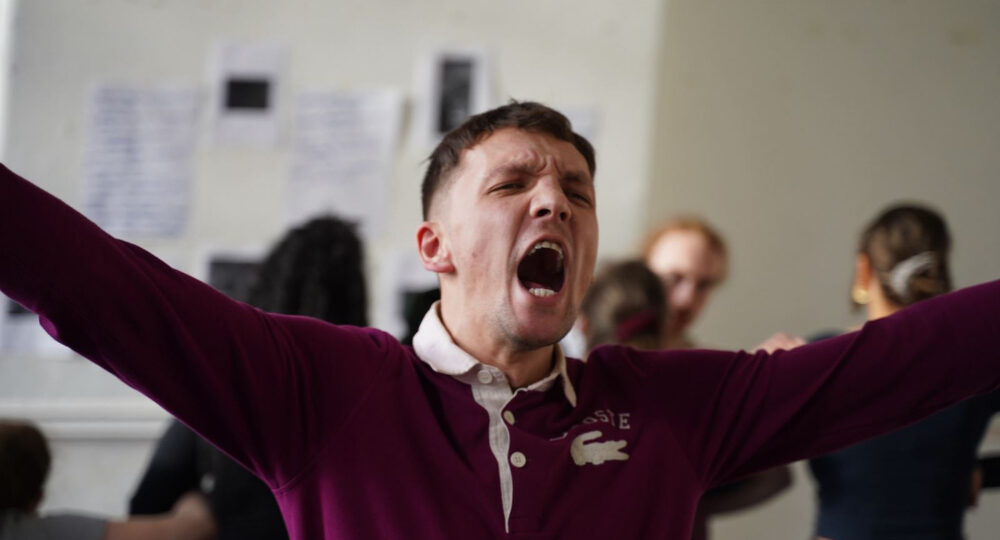 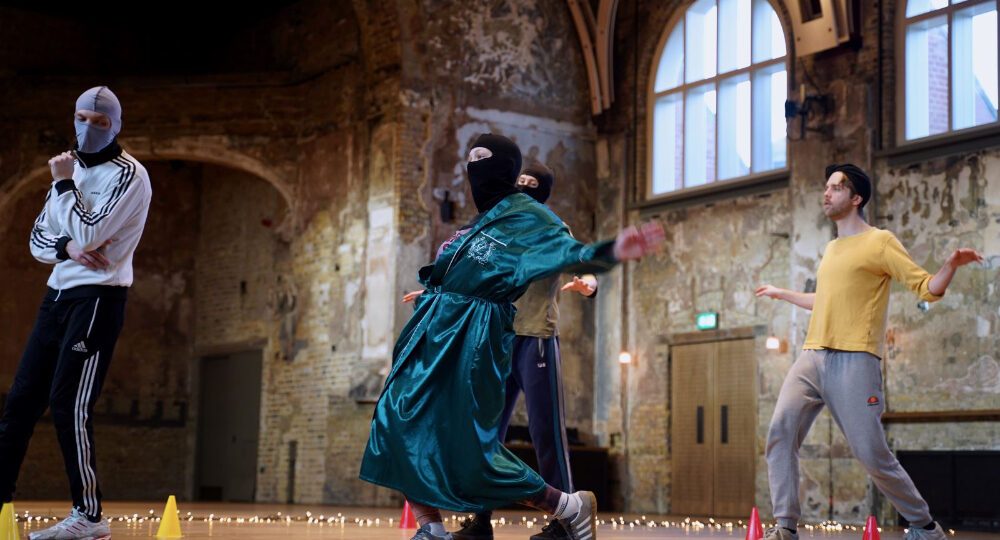 Special thanks to Battersea Arts Centre.