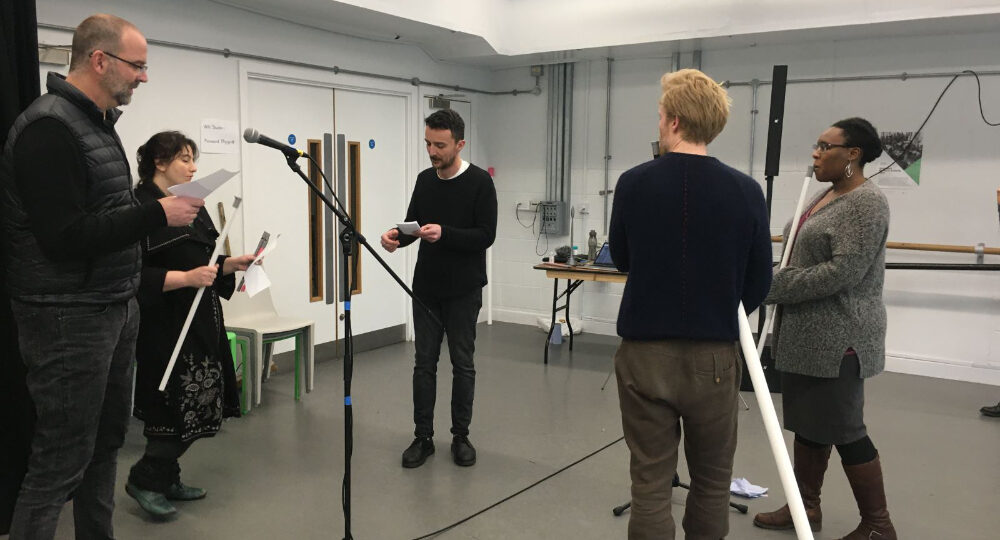 Wojciech Rusin gives an insight into Cyphonium, the Various Stages Festival workshops and an impression of what would have been presented at the Showcase... with an intro from Jess Walker

A spectacle of speculative, digital folklore made with a colourful selection of 3D printed shepherd’s overtone flutes, medieval shawms married to double recorders and snake charming pipes crossbred with baroque oboes. Challenging popular narratives about Eastern European diasporas, the piece pro­poses a story set in a fictional space, perhaps somewhere in the Carpathian mountains. It is an immigrant’s dream of a post-nationalistic utopia, somewhere parallel, where boundar­ies dissolve to the harmonious sound of just intonation.

Woj­ciech’s exper­i­men­ta­tion with the cre­ation of new instru­ments and a new sound world is both orig­i­nal and authen­tic, draw­ing as it does on his out­sider expe­ri­ence as a Pol­ish cit­i­zen liv­ing in the UK, and the ques­tions this throws up about iden­ti­ty, place and cul­tur­al tra­di­tion. By cre­at­ing and writ­ing for entire­ly new, cheap­ly pro­duced 3D print­ed pro­to­types of instru­ments, he intro­duces not only a new sound world, but also a new, democ­ra­tised musi­cal cul­ture, avail­able to every­one, and with­out the bag­gage of nation­al con­text. It is a fas­ci­nat­ing and deeply felt explo­ration of what it means to be a cit­i­zen of the world today, and is ful­ly deserv­ing of fur­ther development.
Jess Walk­er, Var­i­ous Stages artis­tic advisor

Wojciech Rusin tells us more...You can do all sorts of crazy stuff with 3D modelling. Prototypes that illustrate utopias can be quickly fabricated, props for a film that has never been shot. I am fascinated by 3D printing, by printing reed instruments connected to a speculative tradition, a fictional culture. I am intrigued by the political potential of these plastic objects and how they can challenge a narrative. During the process of prototyping I see an infinite number of potential scales and musics in a pipe with 30 holes; I need to cover the unwanted ones with blue tac and something exciting springs into form. I usually use a double reed, an ancient design that is used in all sort of pipes but appears these days in the modern orchestra in the form of an oboe or bassoon reed. It is a connection to something ancient, fixed and static of something which does not exist yet, to the future.

I dream pipes, the 3D printer reflects the mind, and the freshly printed instrument immediately feeds back into the thinking-making process. Changes to the design can be applied immediately and translated into a thin, long string of molten plastic slowly forming a new object. These objects point to an alternative reality. 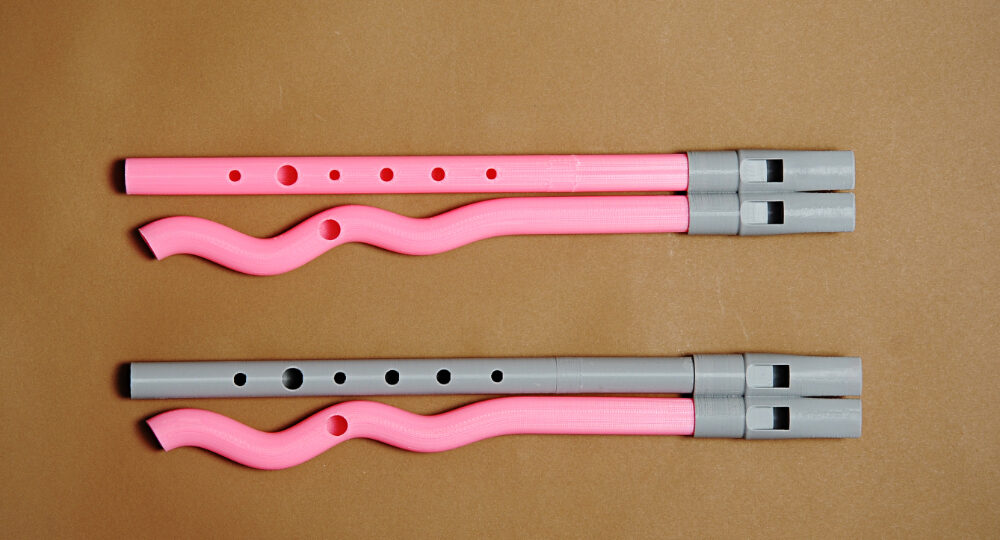 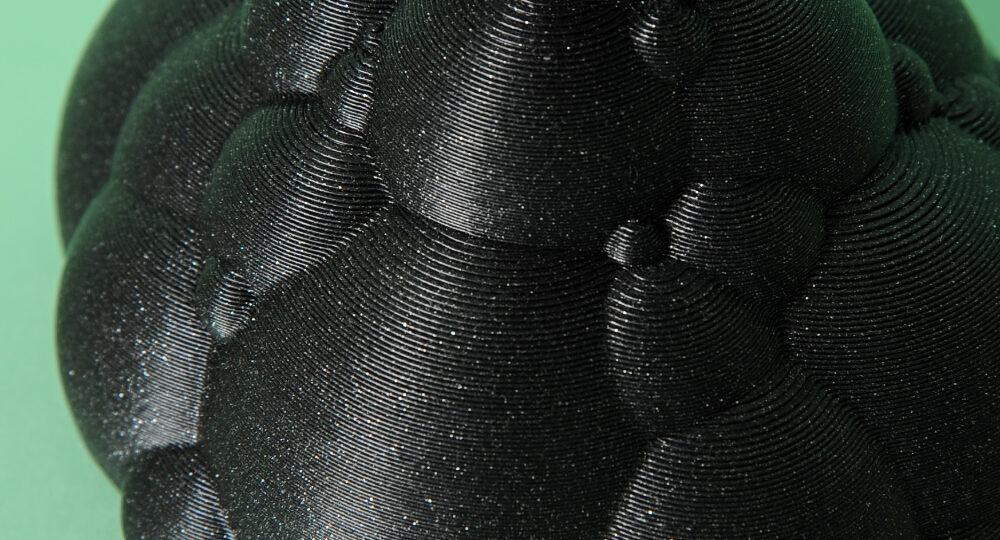 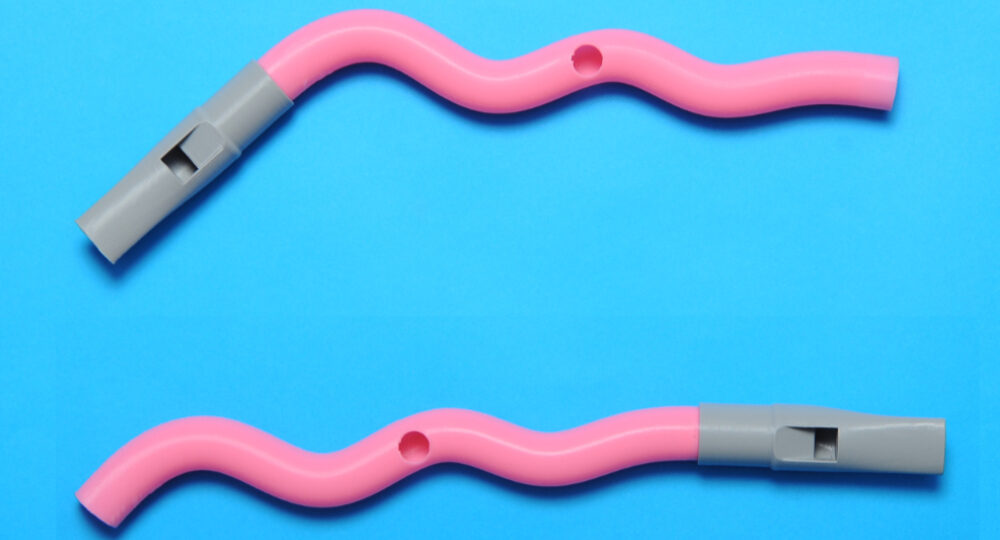 What if we present an alternative, faux folk tale and music of a fictional Eastern European nation, placed somewhere in the Carpathian Mountains, perhaps? What does it do to the subject of representation, or sometimes misrepresentation? It brings the periphery into the centre if only for a moment, but maybe also makes the mechanisms of representation visible or transparent.

This is also about imagination as a strategy. To inflate it, push it beyond boundaries, see how far it can go. It is an artistic strategy with a critical potential, rather than escapism, a retreat into fantasy. This seems particularly relevant today when the conversation has shrunk, dangerously imploded and occupies a claustrophobically small and homogenous field. Mainstream politics today seems to offer a rather small spectrum of options.

I am excited about these future sounds, 3D printed Carpathian shepherds' overtone flutes, medieval shawms mixed with baroque oboes, snake charming pipes married to double recorders. The sound of a post-national cacophony of joy and the ultimate dissolution of boundaries. It's speculative digital folklore.

Various Stages allowed me to test my instruments in a performance context. The rehearsal revealed that some instruments were easy to use, some required practise and others could be slightly modified. Relevant questions about narrative and the use of text have been raised. The festival allowed for encounters between different disciplines. My background is in design and sonic arts and it was very satisfying to work with professional vocalists and instrumentalists. My collaboration with oboist Uchenna was very enjoyable. We managed to design a microtonal pipe equipped with an oboe reed. The new instrument was able to articulate strange intervals.

For the showcase I was hoping to show 10 minutes of different sonic textures and combination of sounds made by the 3D printed instruments and voice.