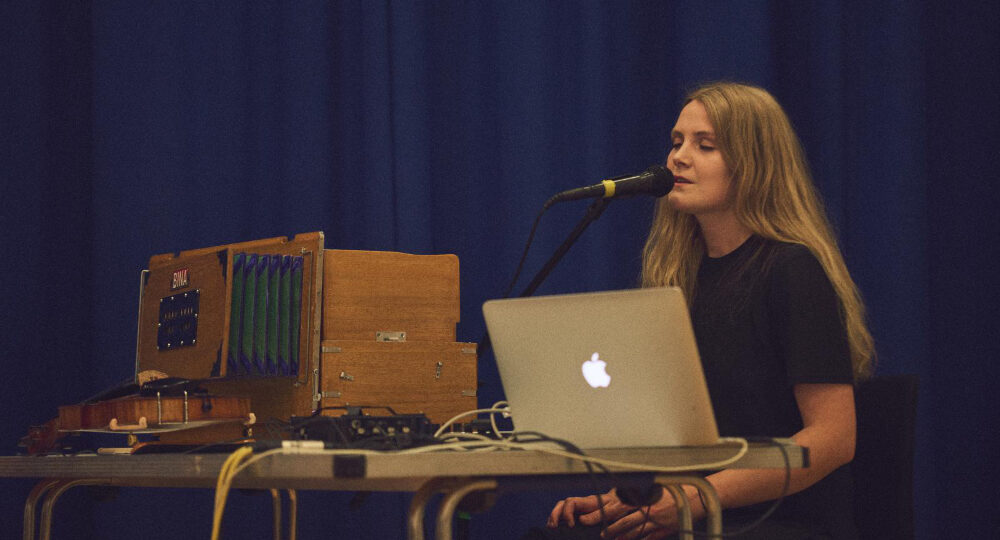 Various Stages Festival 2020: A Place to Fall to Pieces

Anna and Isobel Hughes respond to questions from Freddie inviting us into the world of 'A Place to Fall to Pieces'... 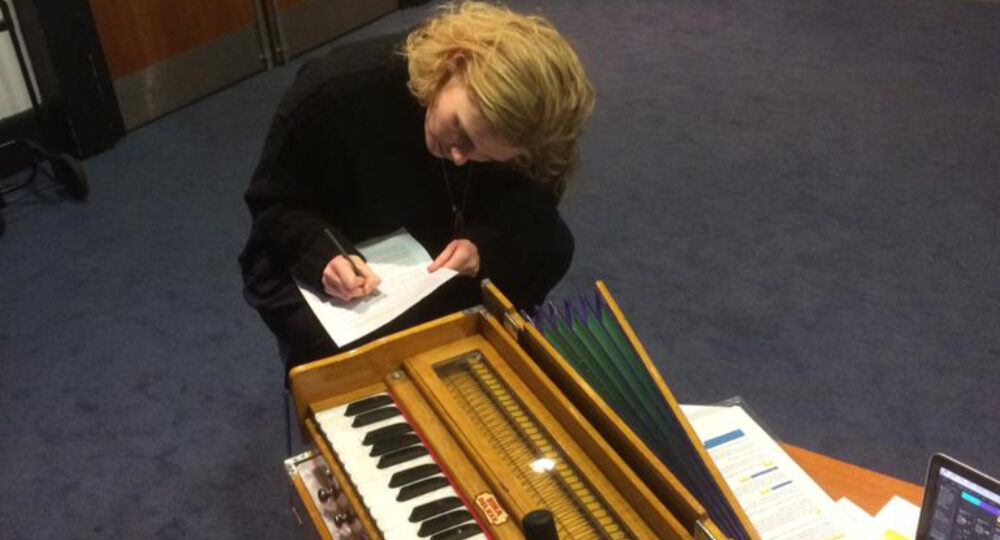 WHERE ARE YOU IN THE WORLD RIGHT NOW?
We spent a couple of days tramping the Lee River and the Walthamstow Wetlands, re-wilding, but Anna has returned to Newcastle and Isobel is still in London.

WHAT WERE YOU PLANNING TO PRESENT AT THE SHOWCASE?
We were planning to present three stories from A Place to Fall to Pieces: A Nomad’s Map of Story and Song, an exploration of displacement, home and belonging and what claim we have on the land we are born on. They are:

1. Swifts - a story about a man, his mother, a ship in the sky and a celestial running shoe

‘When it is a person’s turn to die, they climb the rope to the ship. And the bells toll and the mourners weep and wail and wait for their turn to come. Everyone is very excited about their turn. To be the subject of a funeral is the greatest accolade in this town…’

Magical realism inspired by traditional storytelling and ballads, and some psalms.

2. Winter Hill - a story about accidental witches, a celebration of ancestry, and a Cry to the North

They started to cut their grass with whispers and with twitching fingers
(We smelt of woodsmoke we spoke like spells we played at games where we were not ourselves)
And something of a memory, a word, it stirred, muttered and then escaped them
But it would come back, they were sure
Just as we had done

Poetry and spell-casting, with a thunderous chorus of crying vocals, based on traditional Eastern European singing styles.

3. Avalon - a story about King Arthur, fighting for fairyland, and what you abandon when you fall in love with the sea.

‘Once, when I was very young, I stood at the gates of Avalon. But I turned my back. And I climbed away. Up, through the terraces of Glastonbury Tor, I slipped my way away from the blessed isle. Far from the faint and fading call of fairyland.’

Spoken word and classical text, fiddle melodies and a backdrop of rhythmic loops and live manipulation of electronics. 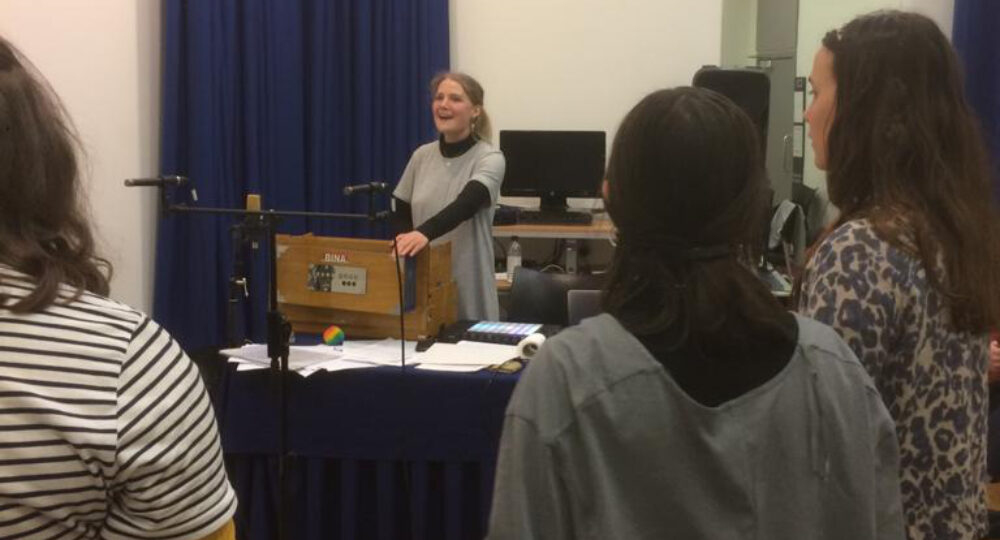 WHAT DID YOU DISCOVER DURING THE WORKSHOPS?
As the workshops began we were a bit stuck on how to take the material we had created from page and headphones and perform it to an audience. Writing and composing together comes naturally to us, as we have a wealth of references (25 years of them!) that make it very easy to communicate. But when it comes to performing together, we get a little bit shy - there was minimal eye contact with each other when we first showed Martin what we had written!

But what we discovered was the way into performing together was through the delight of play. Now, we look at each other and smile, with the joy and swagger of storytellers who know what’s coming and can’t wait to surprise you with it. It’s a style of performance we know all too well in each other, and we can’t wait to explore it further.

These workshops have been pretty much the first time we’ve shown anyone our material! So it’s been a wonderful surprise to see what people respond to (and what they don’t so much!). What we thought was a throwaway verse could become the whole theme of a story, and a sentence we thought was the most important ever written we suddenly realised wasn’t the point at all. The fluidity of the R&D has allowed us to entertain change which we never would have done otherwise.

Working with Erin Fleming and hearing her design ideas was particularly illuminating. Because our material is based on places we know intimately we have a strong sense memory connected with the stories we tell. But what a relief it was to see it translated: with visual objects and design ideas Erin further conjured the world we saw for this show.

We’ve also had the time and freedom to learn a bit more about the work we create. Mostly, that it may be a little different, but it’s original and there is a space for it! Especially once we started exploring visual and performative elements, we see now how and where we could make this show work.

Our highlight has been bringing a group of women together from different vocal disciplines (classical, folk) to play with tone, resonance, vibrato (or none!) and dynamic to create a wild, crying chorus of singers. Working with them in the room was particularly special because they were easy to bounce ideas off and test out dissonant harmonies. 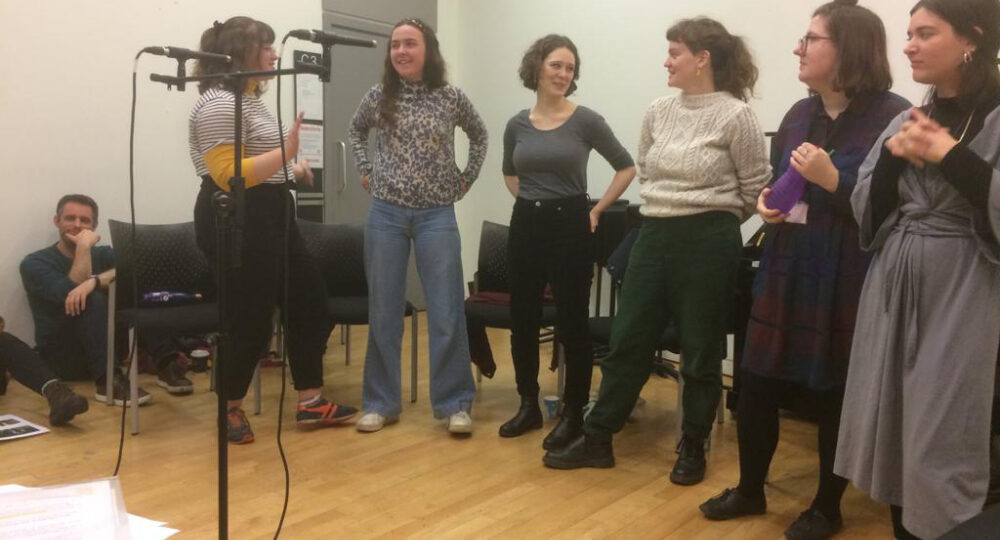 TELL US ABOUT YOUR PRACTICE, ARE YOU TRYING SOMETHING NEW?
We both have a musical background, but Isobel’s practice lies in writing and acting, whereas Anna’s is in composing and performing. What we are trying to do is bring our practices together into a single voice, we know we can because they come from the same place, but as to how - that’s what we have been experimenting with.

This project comes from our history, it’s about something we shared, so we’ve been figuring out how we can work together to tell that story. And because it’s something so important, we’ve discovered it’s a good place to start exploring our practice, because we’re pretty keen on getting it right.

WHAT’S THE BIG IDEA? – WHAT’S YOUR DREAM SCENARIO FOR THE FINAL PRODUCTION?
When you are young (as we were when the story we are telling began) everything is magic. Places, stories, ideas, everything, is grand and beautiful and very, very important. Operatic. Can we transfer that to adulthood? Transcend the everyday and find some things we cannot explain? The world we have created is a world of ships in the sky, of talking hell hounds, of ghosts and witches and ancient kings, and we would love for the production to match the content so it is truly transporting - through lights and shadows and objects and set pieces that transform as our world does -

We have also joked about some aerial rope tricks - but is it a joke?

It’s our dream to tour A Place to Fall to Pieces to the places across the UK where we have lived and that have inspired it (Somerset, Suffolk, Greater Manchester, Yorkshire, London, Newcastle and Cornwall). We want the show to be a conversation, for the audience to think of their own stories when they hear ours, and tell them in reply. By taking it across the country it’s our hope to share with people the joy of the simple things, of the stories and songs of our land.

What are the over-arching themes that grip you?

Home, what it means to belong, migration, displacement and belonging

Land, folklore, and the old stories that we have all forgotten

Magic and the inexplicable, hope and the beauty of simple things

WHAT’S THE SPACE, PLACE AND AUDIENCE FOR THIS PIECE. HOW WILL AN AUDIENCE BE INVOLVED?
As previously mentioned, this piece was always meant to be a conversation. The reason it exists is because it’s our search to discover a place we can call home, a place to fall to pieces. And as it’s developed we’ve realised that in such a fleeting and transitory world, it’s a search everyone is undertaking. So, we want this show to be a communal piece, harking back to a slower time when we related entirely through telling stories, with an active audience. We began to explore how we could go about this during the workshops, through thinking about the performance space and how the audience would be involved in it.

As previously mentioned, we want to take the show across the country, and share it with audiences who have walked the same paths that we have.

WHAT ARE YOU STILL LOOKING FOR?
A director, who could take the show into further developments and on to rehearsals. A Place To Do It! And funding -to make a tour possible this Autumn!

Audio:
A Place to Fall to Pieces demo. 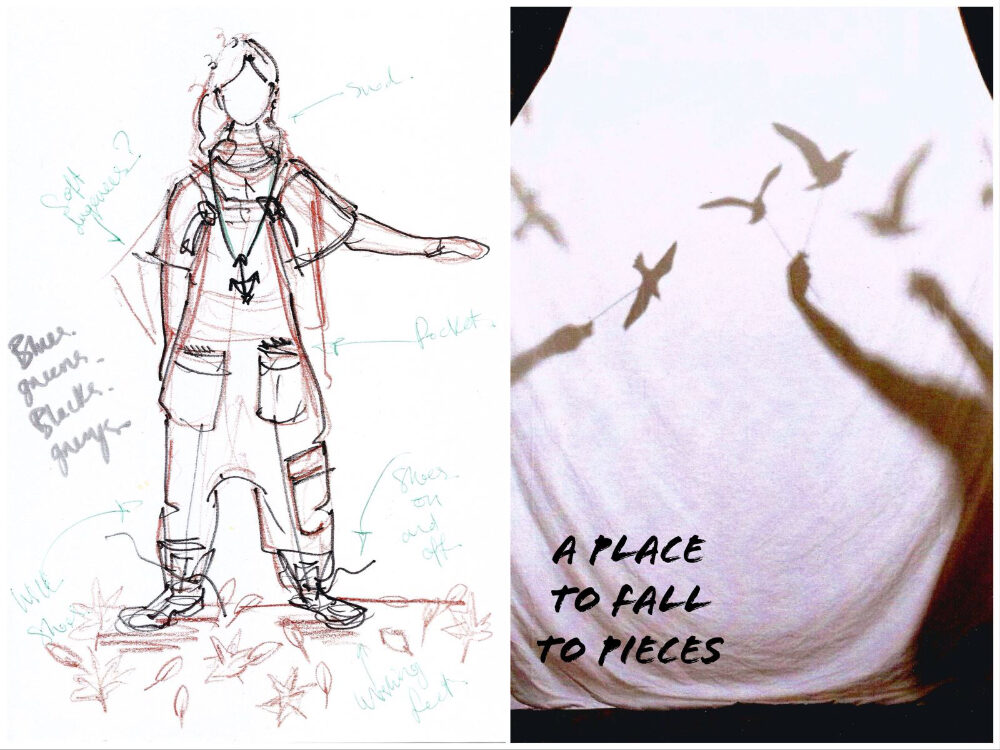 A special thank you to Martin Berry who was the Various Stages artistic advisor for A Place to Fall to Pieces and to Nottingham Playhouse and Sage Gateshead for providing workshop space.